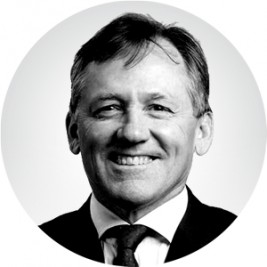 David is the Co-Founder and Chairman of Bailador Technology Investments, an ASX-listed investment fund targeting private expansion stage technology companies. He is also Chairman of KMD Brands [ASX:KMD, NZ:KMD], owner of iconic brands Kathmandu, RipCurl and Oboz. Prior to this, he was Chief Executive Officer of Fairfax Media. His previous experience also includes a period as Chief Policy Advisor to the Prime Minister of New Zealand. Earlier he worked for McKinsey & Co in London.

David is a Rhodes Scholar with degrees in Medicine from Otago University and Philosophy, Politics and Economics from Oxford University. He is currently the Chairman of the Sydney Festival, and sits on a number of other Boards including investee companies of Bailador and charitable organisations.

David enjoyed a highly successful rugby career playing for Otago and Auckland and captaining the All Blacks in 1986-87. David is President of the New Zealand Rugby Players Association. He was awarded an MBE in 1988 and lives in Sydney.